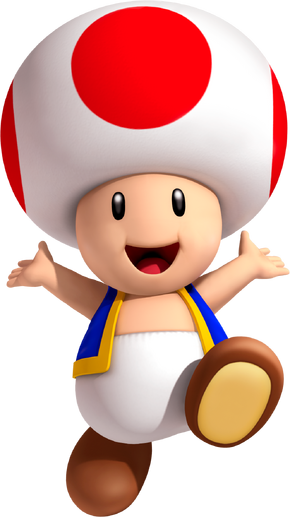 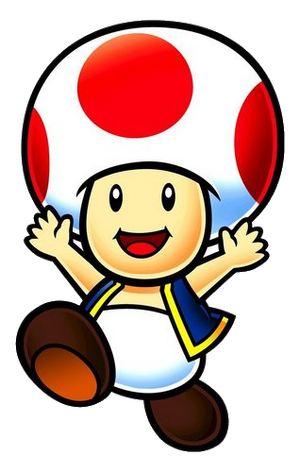 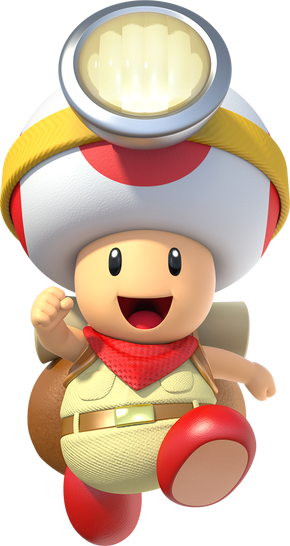 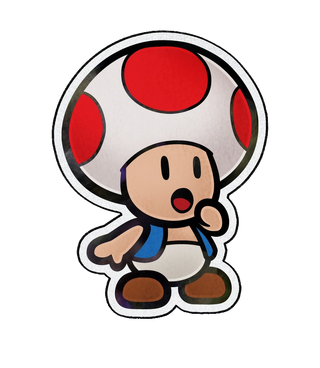 Toad is a major supporting character across the Super Mario Bros. franchise. He normally doesn't play much of a role outside of the informant. But sometimes, he contributes.

The three biggest roles Toad has played over the years is shop-keep, guardian, and adventurer. Toad has provided items to the Mario Bros., and he has guarded Princess Peach on numerous accounts over the years. Originally incapable, Toad has evolved into a miniature hero, in his own right.

Captain Toad is not only an adventurer, but a slightly cowardice hero.

Attack Potency: At least Large Town level (Could compare to Mario's lower feats, like the KE generated by the Bye Bye Cannon) to Multi-Universe level (Defeated Wart, who conquered Muu once and Subcon twice. The latter is an entire universe, as it is a dream world. After his defeat in BS Super Mario Bros., Subcon, an entire universe, ceases to exist. Wart also put a curse over Subcon and its inhabitants, apparently altering the universe in some way. To add onto this, Wart is FAR above the likes of Mouser, who can destroy dreams on his own. To back such a thing up, pretty much all of Wart's displays have been casual, so it makes sense he'd be in this tier. And Toad scales to this) | Unknown. Possibly Multi-Solar System level to Multi-Galaxy level (Darth Koopa revealed that, within a week, he'd conquer and remake the universe into the Koopaverse. Mario had done battle with and defeated Darth Koopa twice, and Toad is comparable to both) | High Multiverse level+, likely High Hyperverse level (Fought Bowser during the events of Mario Party 5, where he stated and showed he was going to ruin, or, destroy Dream Depot, and all dreams within it. In Dream Depot, the dreams of the multiverse's denizens are turned into entire universes. Bowser also planned on destroying Future Dream; this dream in particular was stated by Misstar AND by Mario Party 5's guide booklet on page 28 to be an entire universe, meaning each dream is its own universe. With this info, Dream Depot ranges from at least 5-D to infinite-dimensional). Higher w/ the Star Rod (Mario Party) | Unknown

Speed: Massively Hypersonic+ (Twice as fast as Mario and Luigi, who outsped Lakithunder's lightning. Thus, Toad's exact speed is Mach 1,260) | Superhuman (This is the highest speed he's displayed) w/ Massively FTL+ reactions (Despite zooming through an asteroid field and across the universe at a crash-landing speed, Mario could still catch sight of Mouser, meaning he could see and react at such speeds. Toad is comparable to Mario) | Immeasurable (Bowser was traversing all of Dream Depot and wiping out each dream one by one--which are universes--casually, as evidenced by how he's talking about his plan and such, before destroying Dream Depot itself. Misstar then says "at this rate, he'll destroy the dream worlds one by one." She goes on to say that Toad must protect everyone's dreams. This means Bowser was casually moving at a rate that would allow him to destroy an uncountable set of uncountably infinite universes. Not only does Mario fight Bowser in this game, but during the story, he's actively chasing Bowser through Dream Depot, so Toad accomplished a toned down version of this feat. Even so, he still scales to the full thing for being a touch faster than Bowser) | Unknown

Durability: At least Large Town level to Multi-Universe level (Took attacks from Wart) | Unknown. Possibly Multi-Solar System level to Multi-Galaxy level (Survived hits from Darth Koopa, and whilst in his his own ship, could still sustain himself when hit a few times by Darth Koopa's ship) | High Multiverse level+, likely High Hyperverse level (Tanked hits from Bowser during the events of Mario Party 5) | Unknown

Range: Melee w/o anything. Several dozens of meters w/ Power-ups

Intelligence: Genius (Built the Starshroom in less than a day)

Weaknesses: Power-ups are lost after sustaining a deadly blow. Toad is also a scaredy-cat, though that doesn't always apply. He is also EXTREMELY susceptible to the cold, and has abysmal jumping skills in comparison to others within the franchise. Can act brash at times

Key: In the 2-D Mario games | In the DiC Cartoons | In the Mario Party series | As Paper Toad

Retrieved from "https://character-stats-and-profiles.fandom.com/wiki/Toad_(Canon)/Paleomario66?oldid=48459"
Community content is available under CC-BY-SA unless otherwise noted.