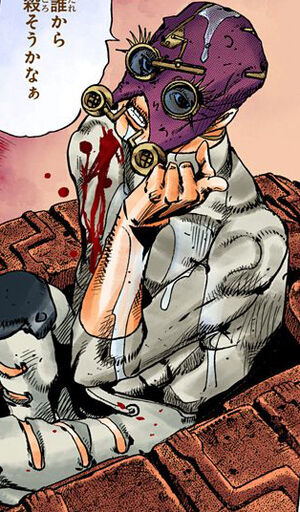 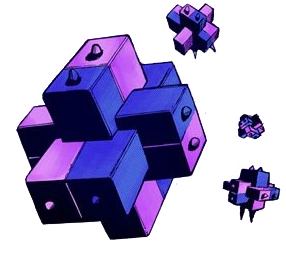 Urban Guerrilla is a member of the Rokakaka Research Organisation which researches the Rokakaka and their effects on people. To further the research of the Rokakaka they sought to find the New Rokakaka Fruit that was created by Josefumi and Kira by tracking down Josuke Higashikata and Rai Mamezuku along with his pet. They are both killed in an explosion during the fight.

Powers and Abilities: Superhuman Physical Characteristics, Longevity (Rock Humans can live for hundreds of years with the estimated life span being 240 years), Immortality (Type 2, Was still alive after having multiple holes punched through his head), Petrification, Statistics Amplification (Can turn himself to stone in order to increase his durability), Resistance to Heat Manipulation (Rock Humans are completely fine with being in temperatures as high as 950°C and as low as -240°C) | Superhuman Physical Characteristics, Biological Manipulation (When his Stand enters someone's body then their body will begin to decay), Soul Manipulation, Non-Physical Interaction (Stands are made up of their user's soul and can damage and destroy other Stands), Invisibility, Intangibility (Stands are invisible to Non-Stand users and are intangible to any Non-Stand)

Attack Potency: Wall Level (Is comparable to other Rock Humans) | Large Town Level (Can break off parts of Josuke and Rai's skin), Can bypass durability by decaying the opponent's body

Durability: Large Town Level (Survived attacks from Soft & Wet), Higher when Transformed (When he is in his rock form he becomes so durable that Soft & Wet's fist shattered when it punched him) | Unknown

Stamina: Superhuman (A Rock Human doesn't have to sleep for at least 2 months)

Weaknesses: While he is turned to stone if he is submerged in water then he will instantly be drowned to death, Brain Storm can be easily washed away with water before it enters the body

Retrieved from "https://character-stats-and-profiles.fandom.com/wiki/Urban_Guerrilla_(Canon)/Unbacked0?oldid=81797"
Community content is available under CC-BY-SA unless otherwise noted.