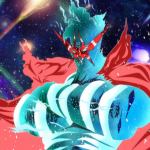 Hello! As you've probably guessed, my username's ZeroTC01, but you can call me Zero for simplicity's sake. I've been a proper member of the Vs community since late 2017. Here's my alternate account, for reference: ZeroTC10. It's pretty useless now, to be frank, but it exists.

I'm obviously a huge fan of fiction: Video games, american cartoons, anime, manga, you name it. I mostly grew up with franchises like Crash Bandicoot, Jak and Daxter, Ratchet and Clank, Dragon Ball, Sonic the Hedgehog (Mostly Sonic X and some of the videogames) and more. I also got into pro-wrestling (Mainly WWE) early 2016, but I'm almost completely burnt out on it as a whole. I almost never tune into entire shows these days.

Though there are obviously more than the ones listed, these are my top 5 favorites:

Note: This obviously refers to verses I know how to scale, in addition to ones which I have at least some knowledge on their feats, if limited. If I'm very knowledgeable on a verse and am confident in my ability to debate using it, it's labeled as "Strong". If I'm knowledgeable, but only to an extent/not very good at debating with them, they're labeled "Average". If I know some things about a verse, but definitely not enough to debate about/use it much, if at all, it's "Limited".

Retrieved from "https://character-stats-and-profiles.fandom.com/wiki/User:ZeroTC01?oldid=94412"
Community content is available under CC-BY-SA unless otherwise noted.