Wadanohara (大海原) is the main protagonist of Wadanohara and the Great Blue Sea. She is a young sea witch and the daughter of Meikai, the Great Sorcerer. She cares deeply for the sea, and her former familiar, Samekichi. She has a deep love for the sea and all its inhabitants, which causes her to burden herself with more responsibility than she can handle. Much to Samekichi's dismay, she always helps out her friends, such as Irena, by going on land to bring back fruits from the surface. She tends to not speak of her own worries, showing she cares more about the happiness of others than her own well being. She is very kind and warm to everyone around her, and cares more about her friends than her own well-being, and has a bad habit of hiding her feelings when bothered or distressed.

Powers and Abilities: Superhuman Physical Characteristics, Immortality (Type 1, is over 100 years old; and 3), Self-Sustenance (Type 1), Magic & Reality Warping (With her magic she can manipulate reality and do things such as changing the sea’s color, repair the barrier and manipulate reality), Regeneration (Mid-Godly, recovered from being heavily damaged by Laurentia), Spatial Manipulation and Time Manipulation (Those related to Meikai can manipulate the barrier which covers the Sea Kingdom, and the barrier which controls the Sea of death. Both seas were referred multiple times to be part of the many parallel universes in the verse), Size Manipulation and Biological Manipulation (Implies that she can increase her size with magic), Higher-Dimensional Manipulation (Can interact with objects such as Chick which transcends the universe), Fourth Wall Awareness (Literally introduces herself to the player), Portal Creation & Dimensional Travel (Creates a portal from the Sea of Death to the Sea kingdom), Fate Manipulation and Precognition (According to Tatsumiya she has taught Wada all of Maikai's spell, Meikai knew about WatGBS's events and plotted everything in order to Samekichi to win), Conceptual Destruction (Lesser creatures like mogekos can physically punch concepts), Confusion Inducement, Darkness Manipulation, Paralysis Inducement, Emphatic Manipulation, Poison Manipulation, Power Nullification, Sleep Manipulation, Invulnerability, Statistics Reduction ("Slug (Large)" Causes all of these effects), Healing, Statistics Amplification (Through rage), Resistance to Darkness Manipulation, Sleep Manipulation, Power Nullification, Emphatic Manipulation ("Caterpillar Clothes" negates these powers). Summoning and Explosion Manipulation (Can summon anchors and make then explode), Death Manipulation Mind Manipulation, Madness Manipulation, and Creation (Read the explanation below) Resistance to Corruption and Mind Manipulation (Implied to have fought against the Sea of Death which can passively corrupt everything, including one's mind and even control it. Even weak creatures like mogekos can resist the effects of Mogeko Castle which can mess with Yonaka’s imaginations and trigger flashbacks on her), Conceptual Destruction and Existence Erasure (Even humans can resist the effect of the Big Knife). It is implied that witches are the source of the powers of their familiars so she would have all of the powers of them, which are: Summoning (Memoca is capable of summoning the Robot Momecha), Statistics Reduction, Curse Manipulation and Sound Manipulation (Has many attacks which can reduce her opponent's stats), Poison Manipulation, Sealing, Darkness Manipulation, Power Nullification, Confusion Inducement, Sleep Manipulation, Emotional Manipulation and Paralysis Inducement (Memoca has an attack which causes all of these effects at the same time), Confusion Inducement (Fukami can cause confusion on their opponents just by looking at them), Sealing and BFR (Fukami is capable of sealing his opponents in the Octoroom)

Attack Potency: Low Multiversal level (Those related to Meikai can manipulate the barrier which covers the Sea Kingdom and the barrier which controls the Sea of death. Both seas were referred multiple times to be part of the many parallel universes in the verse) | Low Multiversal Level (Become massively stronger than before, to the point where she could beat Laurentia, Vendetto (Adauchi) and Ver Million, who previously were massively stronger than her individually. It should be noted that Laurentia alone was capable of casually destroying the barrier without any problem) | At least Low Multiversal Level (Empowered with the magic of Meikai she became stronger than before to the point were she could seal away the Sea of Death along with Princess Mikotsu. It should be noted that she did all of that without using the Sacred Sword which was previously used by Sal (Syakesan) to unseal the Sea of Death and revive Princess Mikotsu) | At least Low Multiversal Level (After hundreds of years after the war between Blue Sea Kingdom and Tosatsu Kingdom; and the Sea of Death, she becomes much stronger with the purpose of protecting her sea)

Range: Low Multiversal (Can control the barrier between the Blue Sea and the Sea of Death)

Weaknesses: Her second form of sealing can only be used at the cost of her own life (Read explanations section for a more deep explanation)

Note: This profile might get major upgrades in the future as the creator of the series keeps publishing mangas and minor 4komas which might serve as an upgrade in the future.

Regarding her sealing hax

Present Wadanohara about to tell the story about her 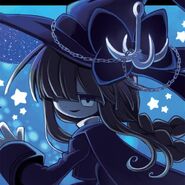 Wadanohara's first appearance in the manga 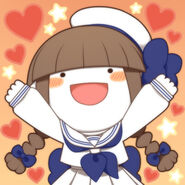 A pixiv sticker that was available to use for a limited time.

Conceptual Art
Add a photo to this gallery

Retrieved from "https://character-stats-and-profiles.fandom.com/wiki/Wadanohara_(Canon)/Lambdawg?oldid=109806"
Community content is available under CC-BY-SA unless otherwise noted.