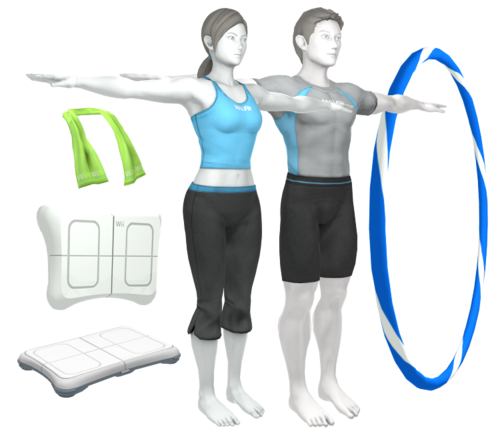 "Spare me my life!"-Zuiikin English.

Work out. It's very important. Always remember to be healthy out there.

Gender: Either Male or Female depending on the trainer and can be chosen by the player

Athletic Human Physical Characteristics , Forcefield Creation (The shield mechanic that covers the entire fighter, lasts for multiple seconds, and is unbreakable when if first spawns (or when a perfect shield is done), are shown off in cutscene form in Bowser Jr's reveal trailer.), Transformation (Can transition between an 8-Bit and 3-D form in an instant.), Light Manipulation and Energy Manipulation and Healing  via Sun Salutation, Statistics Amplification via Deep Breathing, Air Manipulation via Hoop Hurricane, Explosion Manipulation via Volatile Breathing, Dimensional Storage via Header, Afterimage Creation , Danmaku and Energy Projection via Wii Fit (Final Smash), Light Manipulation and Darkness Manipulation Resistance from being able to endure Galeem and Dharkon's light and dark attacks, Non-Physical Interaction and Dimensional Manipulation ( Smash fighters such as Peach can interact with Mr. Game & Watch and harm both ghosts such as Floow and entities made from Shadow Bugs which in turn are harvested from Mr. Game & Watch himself, who aside from obviously being 2D is also made from a primordial substance.), Immortality (Types 4 and 8) ( All Smash fighters killed in battle return to trophy form and can be simply and easily restored back to life with a touch of the base stand.)

Attack Potency : Athlete level| High Multiversal+ (Within the Super Smash Bros macrocosm, infinite timelines/universes are infinitely created with every single action and inaction. Master Hand is the creator of the Smash-Verse and fictionally transcends it, directly shown to affect the Real World's objects such as books and tissue boxes, viewing the inhabitants of the macrocosm as nothing more than plush toys and trophies. What's more there exists a dimension transcendent to the Smash-verse (Or World of Imagination) referred to as the "Real World". Combined with Master Hand's fictional transcendence over the 4-D Imaginary World, the existence of the Real World being Master Hand's realm confirms Master Hand being a 5-D being with 5-D might, as well as his twin Crazy Hand, and Tabuu who with hax is able to casually one-shot. Also, within said cosmology explanation above, Master Hand and the ending of Classic Mode are shown at the same time Sakurai mentions The Real World, effectively removing any form of subtlety about Master Hands role at all. The Real World is mentioned as far back as Melee and Brawl , and is explicitly referred to as the world beyond the Smash-verse in Brawl, with Master Hand as the link between the two worlds twice in both the aforementioned games, and at the end of World of Light all of the spirits are shown ascending upwards , as a symbolic portrayal of them going to the Real World above, they're goal being explicitly stated as such in the direct , complete with a light at the top to drive it home further. Galeem (And by extension Dharkon) on the other hand is so far above any of them he turned Tabuu into a spirit. As Spirits are basically canon gameplay mechanics and equipable pngs of artwork he turned Tabuu into fiction in a similar manner to Master Hand creating and viewing the Smash Cast as plushies and trophies and turning them into such after defeat. While this wouldn't be a full-on fictional transcendence like Master Hand's it would still be a 5-D power far above Master Hand's and Tabuu's. Also, its revealed that Galeem now encroaches upon "The Last Remaining World", revealing that during the burst of light Galeem sacked the entire smash verse. Just before the burst of light he utterly, literally annihilated the entire smash cast one by one, the same Smash cast strong enough to beat a Tabuu that could literally puppeteer Master Hand and one-shot him with a barrier and also strong enough to individually fight 10 Master Hand clones. Also, Final Destination has access to a wormhole that connects the Real World to the World Of Imagination. ).

Speed : Athlete level| Immeasurable (In a flash of light Galeem encompassed an infinite upon infinite amount of timelines except for one.)

Stamina : Impressive (As veritable sages and devotees of the art of health and fitness, they should be above average.)

Intelligence: Above Average Human (Masters of yoga and strength training)