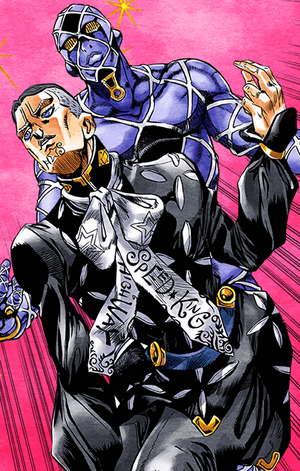 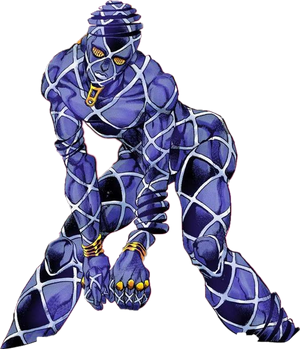 Yuya Fungami is a motorcycle racer that got into a bike accident and got a Stand during this incident. Yuya used his Stand to absorb people's nutrients and make himself better. After he was found by Josuke who beat him up, he stopped stealing nutrients from people. He later helped Josuke when he healed him to help him find Koichi who had gone missing.

Superhuman Physical Characteristics, Extrasensory Perception (As a Stand User, Yuya is able to see Stands which are invisible to non-Stand Users and ghosts), Aura, Summoning (Can summon his Stand, Highway Star), Indomitable Will (Only those with incredible fighting spirits are able to develop and use a Stand), Telepathy (Stand Users can communicate telepathically through their Stands), Enhanced Senses (Highway Star has enhanced Yuya's natural sense of smell to the point he is able to smell is a peach is rotten from several metres away, can tell if a girl is on their period and can smell the adrenaline of someone)

Superhuman Physical Characteristics, Shapeshifting, Disassembly (Highway Star is able to break apart its body into multiple feet to move faster), Flight (While transformed into many feet, Highway Star is able to fly after its opponent), Absorption (Once Highway Star attacks its target it will absorb the opponent's life force and feed it to Yuya), Teleportation (If the opponent gets too far away from Highway Star), Illusion Creation, Pocket Reality Manipulation (Can create a small room which shows whoever sees the room what they want to find), Soul Manipulation, Non-Physical Interaction (Stands are made up of their user's soul and can damage and destroy other Stands), Invisibility, Intangibility (Stands are invisible to Non-Stand users and are intangible to any Non-Stand)